This wiki has been closed because there have been no edits or logs made within the last 60 days. This wiki is now eligible for being adopted. To adopt this wiki please go to Requests for adoption and make a request. If this wiki is not adopted within 6 months it may be deleted. Note: If you are a bureaucrat on this wiki you can go to Special:ManageWiki and uncheck the "closed" box to reopen it.

From Future
Jump to navigation Jump to search 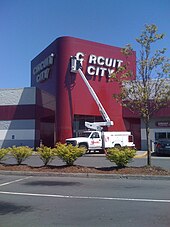 Circuit City, which declared bankruptcy in 2009. Often regarded as the first causality of the Retailpocalypse.

In economics, the retailpocalypse, short for retail apocalypse, was the closing of many physical retail stores that occurred from 2009 to 2022. The retailpocalypse is agreed to be caused by the Market Crash 2008-2009, and the following recession. Many factors have been proposed and proved, such as the over-expansion of malls, changes in spending habit, the decline of the American middle class, and e-commerce. Some modern economists say this is a forerunner to the Market Crash of 2033. The retailpocalypse directly caused the "popping" of the mall bubble.

As a result of Millennial shopping habit, many retail stores and physical businesses were affected, seeing many closures and liquidations. Though this stopped as the Centennials, or Gen Z, became adults, seeing the revival of physical business in place of online shopping. Despite this, it was not enough to keep the retail industry afloat, and many stores and brands closed.

Many retail stores since recovered, a prime example being Best Buy, which used some strategies to offer services that e-commerce could not compete with, securing its business until it went fully online in 2031. Though some have closed down, one being Sears which filed for Chapter 11 bankruptcy in 2025 and 2029. Sears closed its last physical store in 2027.

Retrieved from "https://futurewiki.miraheze.org/w/index.php?title=Retailpocalypse_(Scenario:_A_New_Cold_War)&oldid=296"
Categories:
Cookies help us deliver our services. By using our services, you agree to our use of cookies.